The Merge has been activated on the Ethereum network

On September 15, 2022, the network of the second largest cryptocurrency Ethereum (ETH) moved from an extremely energy-intensive Proof-of-Work (PoW) algorithm to a more environmentally friendly Proof-of-Stake (PoS) 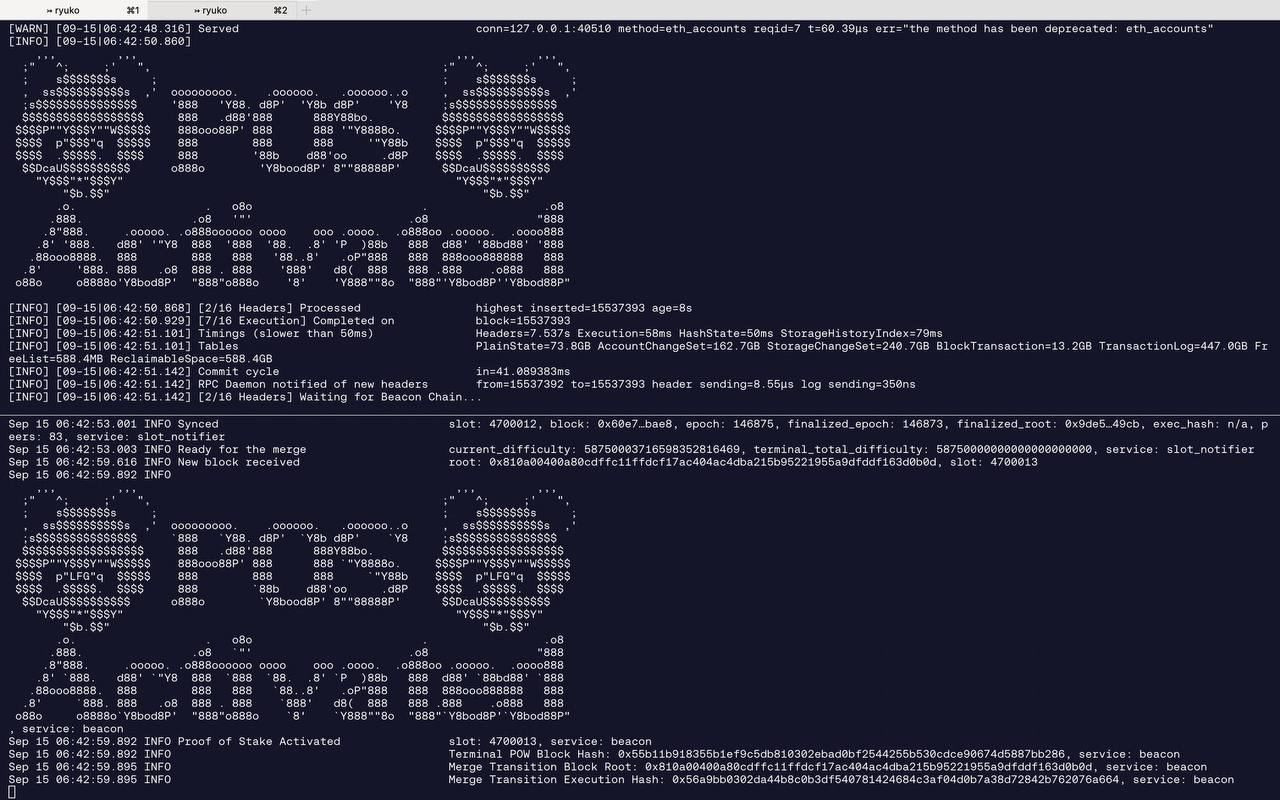 Screenshot of the moment of Ethereum's transition from PoW to PoS

The transition from Proof-of-Work (PoW) to PoS is the most important and complex upgrade in the history of the blockchain. One of the creators of the project and the founder of Consensus, Joseph Lubin, called the update the third major event in the industry after the appearance of bitcoin and the creation of Ethereum.

How migration to PoS will Affect Ethereum

The transition of Ethereum to Proof-of-Stake pleased not all participants of the crypto community, as miners faced the prospect of losing income. This prompted them to create a fork to stay on the old Proof-of-Work mechanism.

Ethereum already has a Proof-of-Work consensus–based blockchain, Ethereum Classic, which has no plans to switch to Proof-of-Stake.

The ETHPoW token (ETHW) based on Proof-of-Work was presented in August 2022. On the morning of September 15, information appeared on the network that the mining of coins decided to support the teams of several large pools at once.

Against the background of the launch of the PoW fork, Ethereum holders will be able to receive new tokens in a 1:1 ratio to their ETH balance. The initiative was supported by some crypto platforms, including the Binance exchange.

The following important information concerns the use of the Fund's website icb.fund. Please read the information and accept all the stated conditions before accessing this web site. This web site is designed only for people who:

a) are experienced investors; b) are legally able and have the right to practice investment according to the law of their jurisdiction; c) accept and completely understand all the risks connected to the practice of investment. The Fund's services are not aimed at, or intended for retail clients, and are not subject to laws regulating the mutual relations of retail clients who have obtained the services of the Fund for their personal or family needs, rather they are aimed exclusively at making commercial profit. Any entity considering investment in any of the Fund's products, accepting these rules and using the website, guarantees that they are accordingly qualified and well informed with regard to such investment, and understand all the tax implications of investment activity. The Fund's potential investors should know that the value of their investments may decrease as well as increase. Any investment carries the risk of the potential loss of capital, and investors may not only not increase their capital significantly, but may also lose their original investments or part of them. The information on this website may contain data and opinions received from external sources, and the Fund does not accept responsibility for the accuracy or completeness of such data or opinions, which may be subject to change without notice. Also, the information provided by the website is not a proposal to buy or sell cryptocurrency market products. This short statement cannot describe all the risks and other significant aspects of the cryptocurrency or token (ICO) market. If you are in doubt concerning whether investment is for you, and before you continue working with the Fund's website, you should consult your financial advisor or other professional specialist in this area.

In agreeing to access this web site, you accept the aforementioned information and agree to provide only truthful and authentic information to the Fund.

The information provided on this website is not intended for use or distribution by individuals or legal entities who are citizens or residents of the United States, including Puerto Rico, the US Virgin Islands and any other US domain, and also the British Virgin Islands, North Korea, Iran, Syria or any other jurisdiction or country where such use or distribution would be contrary to the domestic law of the state or to the requirements of the local regulator.